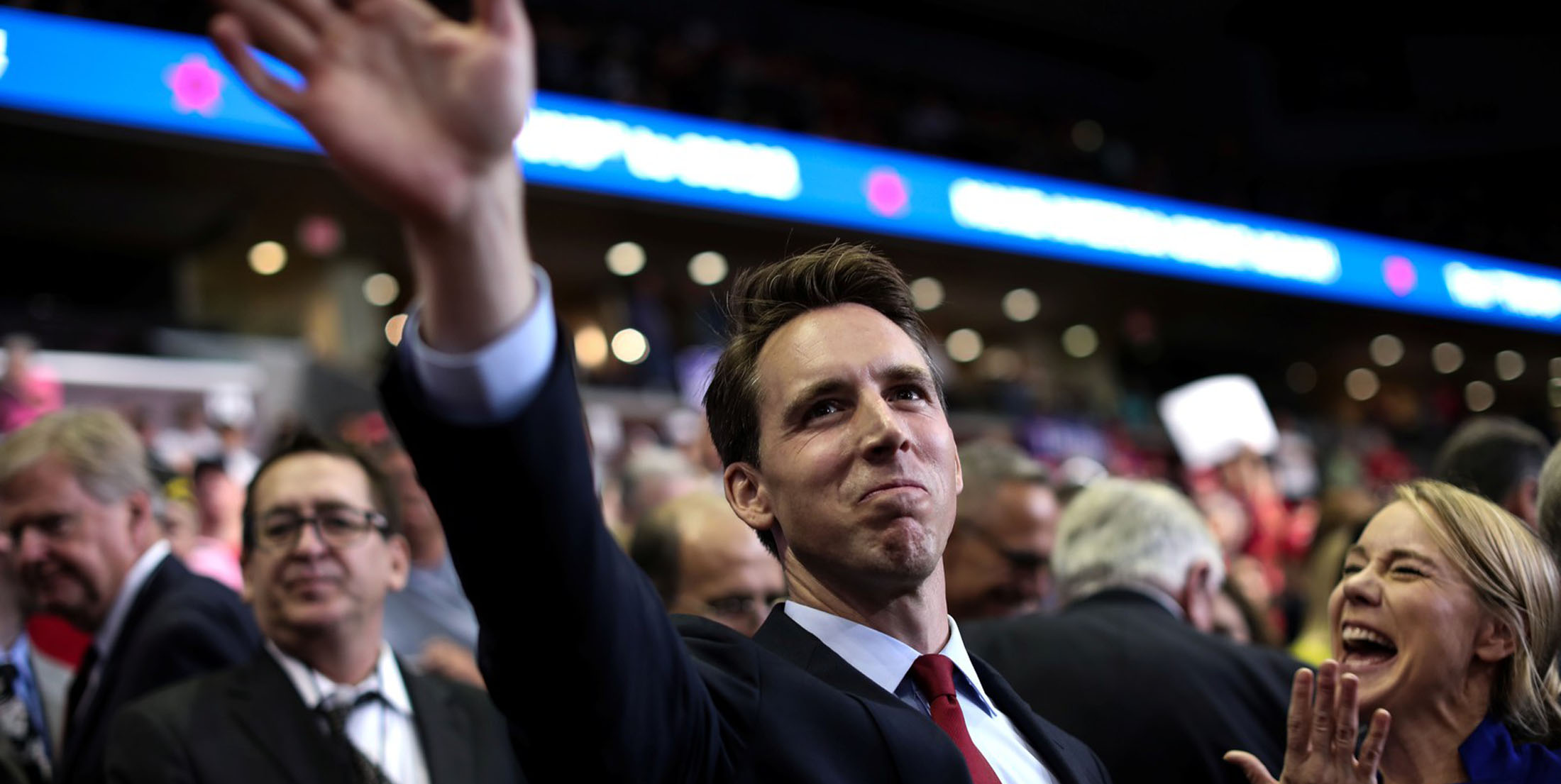 Senator Josh Hawley Gets the Last Laugh on Cancel Culture

Last October, Simon & Schuster, a giant in the publishing industry, announced it would be releasing Senator Josh Hawley’s book titled The Tyranny of Big Tech. As reported by AP News, Hawley had frequently criticized the various social media giants “for everything from alleged anti-conservative bias to monopolistic control of the online market.”

As Hawley explained, “At a time when these platforms are determining elections, banning inconvenient political views, lining politicians’ pockets with hundreds of millions of dollars, and addicting our kids to screens, I want to draw attention to the robber barons of the modern era. This is the fight to recover America’s populist democracy. That is why I am writing this book.”

The book was targeted for a June 2021 release date, but on January 7, 2021, one day after the storming of the Capitol, which was also one day after Sen. Hawley called for an investigation into claims of election fraud, Simon & Schuster released this statement:

“After witnessing the disturbing, deadly insurrection that took place on Wednesday in Washington, D.C., Simon & Schuster has decided to cancel publication of Senator Josh Hawley’s forthcoming book, THE TYRANNY OF BIG TECH.  We did not come to this decision lightly. As a publisher it will always be our mission to amplify a variety of voices and viewpoints: at the same time we take seriously our larger public responsibility as citizens, and cannot support Senator Hawley after his role in what became a dangerous threat to our democracy and freedom.”

So, a book exposing the tyranny of big tech got canceled because of a knee-jerk reaction to Hawley’s actions on January 6, actions that were neither dangerous nor unpatriotic. And this happened at the same time that President Trump’s Twitter account was being shut down for life, along with many other conservative accounts being purged. Oh, the irony!

But the story doesn’t end there.

On January 18, 2021, Regnery Books, one of the conservative publishing giants, announced that their company would now be publishing the senator’s book, with a release date of May 2021.

As Mollie Hemingway reported on The Federalist, “Simon and Schuster canceled the book Jan. 7, quickly caving to a pressure campaign organized by leftist activists and making the Missouri Republican one of the highest-profile victims of cancel culture.”

Said Thomas Spence, the president of Regnery Books, “It’s discouraging to see them cower before the ‘woke mob,’ as Senator Hawley correctly calls it. Regnery is proud to stand in the breach with him. And the warning in his book about censorship obviously couldn’t be more urgent.”

Not surprisingly, interest in the book exploded after its cancellation and reinstatement, and now, it has debuted on Amazon as one of top books in the nation. And, quite appropriately, it is the #1 bestseller in Censorship and Politics on Amazon.

Simon & Schuster inadvertently confirmed Hawley’s concerns, spiking interest in his book rather than drawing attention away from it.

But this is not the first time this has happened, nor will it be the last.

Were you aware of Prof. Jordan Peterson before he suddenly skyrocketed to international fame? Did you know of him when he was a respected but relatively obscure psychology professor at the University of Toronto? Were you one of the rare readers who waded through his serious, academic work, Maps of Meaning: The Architecture of Belief, which took him thirteen years to write and which was published in 1999?

That was all before 2016, when quite suddenly and unexpectedly, Peterson became an international bestselling author and a man hailed by some as “the most influential public intellectual in the Western world right now.” What launched him into worldwide fame?

It was when he refused to bow down to the spirit of political correctness in Canada, specifically, being forced to use certain pronouns when addressing transgender-identified people.

When he was asked on TV what would happen if the government required him to comply with its new speech rules, he answered, “If they fine me, I won’t pay it. If they put me in jail, I’ll go on a hunger strike. I’m not doing this. And that’s that. I’m not using the words that other people require me to use. Especially if they’re made up by radical left-wing ideologues.”

But in Peterson’s case, instead of going to jail or being taken to court or being disciplined by his university, Peterson became an overnight sensation.

According to his publisher, his second book, “12 Rules for Life has sold over five million copies worldwide and his global book tour has reached more than 250,000 people in 100 different cities.”

Instead of his voice being silenced, Dr. Peterson’s voice has now been amplified to reach multiplied millions around the globe, providing another graphic example of what can happen when you make a principled decision not to cave in.

I’ve been working on a major book that addresses how we can overcome cancel culture, due out early next year. But suffice it to say now that we should be encouraged by the examples of Sen. Hawley and Prof. Peterson. The more the culture tries to silence us, the more we will get our message out.

We will not be silenced.

OT posted a comment · May 06, 2021
Swkh310 Yes this is AMERICA where people, politicians, and tech can act like "BLIPS" and get away with it! It seems they do ....But do they really ! the tech company does not have a soul but the people who run them do ! I think your incessant indictment of Trump and all your perceptions of all he did wrong doing ! compared to what is going on under your nose ! I can only attribute it to a bias that you have that goes beyond the johari window.a blindness that results from being a Hypocrite-intentional it seems !

OT posted a comment · May 06, 2021
Yes It Appears So, BUT Still a violation of public trust and fairness no integrity !

Swkh310 posted a comment · May 05, 2021
This is America, where all roads lead to the bottom line. For better or for worse, the only God corporations worship is money.

OT posted a comment · May 04, 2021
Left liberals Deliberately overlook something, especially something that benefits and furthers there policies , agenda Too be so corrupt is disappointing!

OT posted a comment · May 04, 2021
The Left is on collusion with big tech vise versa : secret or illegal cooperation or conspiracy, especially in order to cheat or deceive others. there is nothing secret about it because it suits and benefits who’s in the whitehouse. No surprise there! Wrong is wrong and the fact the

OT posted a comment · May 04, 2021
I celebrated when miscreant actors like Disney/Simon & Schuster lose! and their Targets Senator Josh Hawley / Gina Carano The Mandalorian Win !

OT posted a comment · May 04, 2021
So much for what defines the left and how it celebrates it's own disingenuous, dishonest deceitful underhand underhanded duplicitous double-dealing two-faced dissembling insincere false lying untruthful mendacious not candid not frank not entirely truthful artful cunning crafty wily sly sneaky tricky scheming calculating designing devious unscrupulous shifty foxy economical with the truth terminologically inexact subtle hollow-hearted false-hearted double-faced truthless unveracious- conduct and how skwh310 smuggly posted Swkh310 posted a comment · Feb 11, 2021 It is a bottom line business decision....I say It is pure manipulation for political/social reasons by extention of the politicaland soicial bent of ceo's who run the companies !