Since God Hates the Shedding of Innocent Blood, Can a Christian Vote for Hillary?

There are few sins God hates as much as shedding innocent blood, especially the blood of children. Seeing that Hillary Clinton is a radically pro-abortion candidate and seeing that the Democratic platform reinforces those radical views, can a Christian vote for Hillary in good conscience?

In Jeremiah 19, God explained why the people of Judah were about to go into exile: It was because they worshiped idols and because they “filled this place [speaking of Jerusalem] with the blood of the innocent. They have built the high places of Baal to burn their children in the fire as offerings to Baal-- something I did not command or mention, nor did it enter my mind” (Jer. 19:4-5).

Because of these heinous sins, Jerusalem was destroyed and the Temple of Yahweh burned to the ground, with tens of thousands going into exile.

Does God hate the shedding of innocent blood any less today, especially when it is the blood of children? Listen again to Jeremiah: “They have built the high places of Topheth in the Valley of Ben Hinnom to burn their sons and daughters in the fire-- something I did not command, nor did it enter my mind” (Jer. 7:31).

What, exactly, did this entail? Listen to this description from the medieval Jewish commentator Rashi, who explained that the high places of Topheth refer to the god “Molech, which was [made] of copper, and they would heat it up from underneath it with its hands spread out and heated. And they would place the child on his hands, and he would be burnt and moan, and the priests would beat drums so that the father should not hear his son’s voice and take pity.” What a horror!

Now stop for a moment and look at these images of aborted babies and ask yourself how the Lord must feel about the shedding of this innocent blood – the blood of innocent babies in the womb.

Can you, as a follower of Jesus, cast your vote for a candidate who supports this bloodshed? Can you vote for Hillary Clinton, one of the best friends Planned Parenthood has ever had?

Just look at the stark contrast between the RNC and DNC platforms on abortion.

“‘We will continue to oppose — and seek to overturn — federal and state laws and policies that impede a woman’s access to abortion, including by repealing the Hyde Amendment,’ it reads.”

In complete contrast, the RNC platform on abortion begins with: “Faithful to the ‘self-evident’ truths enshrined in the Declaration of Independence, we assert the sanctity of human life and affirm that the unborn child has a fundamental individual right to life which cannot be infringed.”

The platform supports “a human life amendment to the Constitution and endorse legislation to make clear that the Fourteenth Amendment’s protections apply to unborn children.” It opposes “using public revenues to promote or perform abortion or fund organizations which perform or advocate it and will not fund or subsidize health care which includes abortion coverage.”

It calls for appointing judges who will uphold these values, reaffirms its opposition to partial birth abortion, and salutes “the many States that have passed laws for informed consent, mandatory waiting periods prior to an abortion, and health-protective clinic regulation.”

Let’s also remember that Hillary Clinton is hardly a pacifist who would avoid the shedding of blood in war (in contrast with allegedly war-mongering Republicans). And even so, there is a world of difference between going to war to defeat terrorism and killing a baby in the womb.

Some have argued that it doesn’t matter where a candidate stands on abortion since the laws never really change. After all, we’re told, after 20 years of Reagan, Bush, and Bush, Roe v. Wade was still not overturned.

That’s true, but one reason is that we also had 16 years of Clinton and Obama. What would have happened if we had 36 years of presidents in the mold of Reagan? What if the progress made under a pro-life president wasn’t undone by a pro-abortion president? What if all presidential appointees to the Supreme Court were pro-life during the last 36 years? The answers are self-evident.

And let’s not minimize the progress that has been made in different states, including requiring women to view an ultrasound of their baby before aborting. Thank God for every life saved.

The bottom line is this: Can you look at pictures of aborted babies – such as baby Malachi – and read verses about God’s hatred of killing children and then vote for a candidate who aggressively defends a woman’s “right” to this bloodshed, even into the ninth month?

It’s one thing to be uncertain about voting for Trump (or other candidates). It’s another thing to vote for a radical, pro-abortion candidate like Hillary Clinton.

I, for one, do not see how you can look Jesus in the eye, look abortion in the eye, and vote for Hillary.

Only God is your Judge, and you and I will give ultimate account to Him. But if you’re a regular “pro-choice” voter, I urge you to reconsider your ways.

ROBERT PRINCE posted a comment · Aug 22, 2016
Robert Prince, MD AS A CHRISTIAN I COULD NEVER VOTE FOR HILLARY I am a retired Psychiatrist with over 45 years of psychiatric experience. As a Christian I am convinced that I could never vote for Hillary Clinton. She and her party support the "abortion on demand" mentality and support homosexual marriages (overturning the longstanding definition of marriage as the joining of a man and a woman.) Along with supporting the rights of transgender men or women to use bathrooms and locker rooms of the opposite sex. They want the same rights that "regular people" have. But the truth is that they want more than the "regular" persons have. If a "regular" young man were to walk into a ladies restroom, he could be arrested as a peeping Tom or an exhibitionist. Transgender persons could have all the rights of privacy as "regular" people if institutions have multiple stalls in Men's rooms or Women's rooms, along with single stall rooms labelled as Men and/or Women. I am aware that Donald Trump has not always shown discipline of his tongue on many occasions, but I am convinced that if he will follow the counsel of Mike Pence. Paul Ryan, and others with level heads, he could well become as great a president as Ronald Reagen. I know that he is committed to appointing Supreme Court justices who will truly uphold steadfast adherence to our Constitution as Justice Scalia did. I believe that if Hillary Clinton is elected, she will do as Obama did in appointing justices who will continue ignoring the religious heritage of our Declaration of Independence and Constitution, turning the Word of God into a lie. 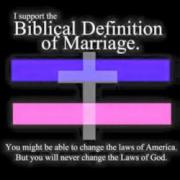 Royce posted a comment · Jul 31, 2016
Good article, Dr. Brown. I only wish you had made one point or at least made it a little stronger. I would ask the question, "Why would you think you are a Christian when you support and advocate for that which is in opposition to Jesus Christ. One can NOT accept, approve, endorse, or support that which Christ condemns as be following Him. It is a contradiction in terms.

Dayspring posted a comment · Jul 29, 2016
Hi Dr. Brown, I just read your story in Lee Stobels book"The Case for the real Christ" What an amazing testimony ! Here is my Dilemma, Hillary and the Democratic Party are almost always the blame for abortions in America. Here is what I found out and I was blown away........The 1973 Roe Vs. Wade.....The President of the United States was a Republcan named Richard Nixon and the Supreme Court was a Republican dominated appointed Supreme Court....and they made abortion the Law of the Land......This is never talked about......I believe that both parties are responsible for abortion in our country.......also in this last Supreme Court decision that made Gay marriage the law of the land.......Republican appointee Justice Kennedy had the swing vot and voted for gay marriage...astonishing to me..........again President Obama Pushed it and Justice Kennedy failed to vote conservative........I would love to know your thoughts Thank You

Watching posted a comment · Jul 29, 2016
Curious that Wakefield introduces two additional subjects that were not addressed in the article. Makes one wonder if Wakefield is for or against killing innocent babies.

[email protected] posted a comment · Jul 28, 2016
Since god hates the the shedding of innocent blood (during christian crusades christian crusaders killed children too) can a person be a christian? If someone is going to ask stupid questions make sure only people that are too stupid to question it see that question, lol. Can a person be a Jew? (Children sometimes get killed when Israel retaliates or attacks their muslim neighbors) Using different facts I wonder how many different religions we could question.